Remembering those who serve

Happy Memorial Day!  This is such a special holiday for me...always has been.  We would load up in the car and drive from cemetery to cemetery, lovingly placing flowers on family graves.  Grandma Gash would talk about each person as we decorated their resting spots.  I feel like I know so many of my ancestors because of those outings.  We didn't have soldiers in our family...somewhere a great great uncle was in the Civil War, and momma had a couple of cousins in Korea...but none until my brother Ron joined the Air Force Band after high school.  My dad was sooo proud of him.  Dad wanted to be in the military, but he was rejected because of his feet.  After mom died, I found envelopes with his rejection letters from Army, Marine, and Navy!  It was really important for him.
I know he would've been proud of our Tami, who joined the Navy during high school.  I know I am.  While she never saw combat (thank you Lord!), while stationed in Cicely she checked for bombs under incoming cars on base.  Scary enough for this mom.  She completed her 5 years with honors and is still "in-active reserve".  Her husband David is a Master at Arms in the Navy, and is planning to be a "lifer".  He spent a year in Bahrain, on  shore patrol.  Thank God for his safe return.
I have twin nephews that went to different branches.  Jeff did his time on a nuclear submarine.  Chris is Army and is stationed in Kandahar, very much in harms way.  Thank you for helping keep us free. 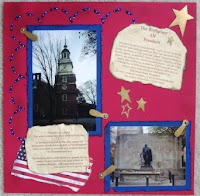 A few years ago, Steve and I went to Philadelphia...he for a conference and me for a history tour!  What a joy to walk in the same place as our forefathers. I did this page reflecting on the awe I felt while there (it's an older page and I was just starting to fall in love with distressing!  I used the Bazzill In-Stitches paper with a tiny blue dot ribbon threaded through it. )  My journaling sums up what I would like to share on this  holiday, in honor of our fallen soldiers.
The Birthplace of Freedom
Words can never completely express my feeling when I saw Independence Hall for the first time.  Here, in front of me, was the place where Jefferson, Washington, Franklin..heroes of my childhood had drawn up plans for a new United States.  As the sign states, they died in darkness.  I felt awe as I was walking the cobblestone streets (more like alleys)
where they had strolled and talked of freedom from England.
To say I was overcome, is and understatement.
On many occasions, I had tears. 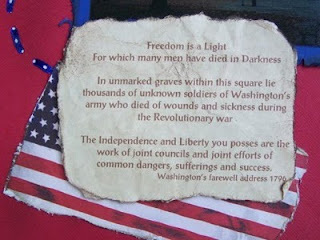 A blog post 2 days in a row?  I must be sick!   Nope! Just excited that my Paper Pumpkin Kits have arrived!  Stampin' Up! has changed s...